Wecome to your home for all things related to the Peace of Westphalia!  For the latest news and updates, go to the news page. 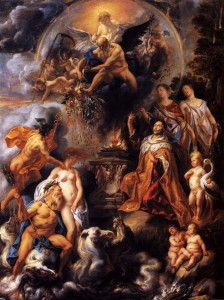 Allegory of the Peace of Westphalia by Jacob Jordaens, 1654

What is, or was, the Peace of Westphalia?  It was a treaty signed in 1648 by France and Sweden, on one side, and by the Holy Roman Empire, on the other side, that put an end to the Thirty Years’ War.  Well, really France and Sweden signed separate documents; and although some fighting stopped, many combatants in Europe continued at war for another 10 to 20 years. The conclusion, like most things about the Peace of Westphalia, was filled with ambiguities.

But let’s skip the ambiguities for a moment and address some basic questions about the Peace of Westphalia.  (The following is, of course, grossly oversimplified.  If you want a more comprehensive account, read a book on the subject; or, if you are really ambitious, go straight to the primary sources — many available on line.  Or you can ask Dr. Westphalia himself.)

The Thirty Years’ War: There were two main power blocs in Europe in the early 17th century, France and the Habsburgs.  Since the reign of Charles V (r.1519-1556), the Habsburgs had ruled in Spain and Austria, and this was at a time when Spain was the strongest European state — it ruled parts of the Low Countries, Italy, and even some provinces located in modern France, not to mention its overseas empire in the Americas and the East Indies.  The Austrian and Spanish branches of the Habsburg family maintained close ties, including frequent intermarriages.  France had the advantage of a compact territory, but it also had a sense of being surrounded by its Habsburg rivals.  To counter this, it had long pursued a policy of allying with Protestant rebels against the Habsburgs.

The Reformation (begun in 1517) not only broke the religious unity of Europe, but also created new political conflicts as well.  The Low Countries rebelled from Spain starting in 1570 and by 1609 had established an independent country, the United Provinces (now the Netherlands).  The Holy Roman Empire, which was already decentralized politically before the Reformation hit, adopted a federal solution:  by the Peace of Augsburg (1555), each territory was allowed to determine its own religion, provided it chose either Catholicism or Lutheranism.  Tensions grew over the next 50 years over the interpretation of this treaty, and Calvinists, who were excluded from it, were particularly anxious for some revisions.

In 1618, Habsburg control of Bohemia was challenged by Protestants there.  This turned into an Empire-wide struggle in which the Austrian Habsburgs, aided by their Spanish allies, were overwhelmingly successful.  In 1629, Emperor Ferdinand II issued the Edict of Restitution, a major revision of religious territory in favour of Catholics.  In response to growing Habsburg power, Sweden intervened in 1630 and overran much of the northern part of the Empire.  France subsidized Sweden’s war effort but preferred to avoid direct intervention. However, after Sweden suffered a major defeat in 1634 (battle of Nördlingen) and appeared on the verge of collapse, Cardinal Richelieu felt compelled to enter the conflict openly.  For the remainder of the war, two coalitions fought the war:  on one side, France and its allies, Sweden and the United Provinces (which was still fighting Spain); on the other side, the Holy Roman Empire (led by the Austrian Habsburgs) and Spain.  Most of the territories in the Empire tried to stay out of the conflict, but Bavaria fought alongside the Habsburgs and Hesse-Kassel was allied with France and Sweden.

Origins of the congress: The Congress of Westphalia was conceived even before all the powers got involved in the war.  Pope Urban VIII wanted to prevent a conflict among the Catholic monarchies of France, Spain, and Austria, so he summoned a conference to Cologne.  Meanwhile, Christian IV of Denmark was anxious to keep Sweden’s power from expanding too much, and wavered between joining the Habsburgs in open war and calling for his own peace conference in Lübeck for Sweden and Austria to settle their differences.  France insisted that it would not negotiate without its allies, so eventually the two conferences were merged into a single one to be held in the nearby towns of Münster and Osnabrück.  France would have preferred a single location, but it could not settle precedence questions with Sweden, so they agreed to carry on the talks in two different cities but keep the talks co-ordinated.

Negotiations: The start of negotiations was delayed repeatedly by other precedence issues, arguing over preconditions, and downright stalling.  One major issue was that France, at the urging of Hesse-Kassel, insisted that Imperial territories be represented on their own behalf.  In 1645, Emperor Ferdinand III agreed, and dozens of their representatives joined the negotiations.  At the beginning of 1646, France and Sweden began negotiating their territorial “satisfaction” from the Empire, and had largely settled it by early 1647.  France gained rights in the Habsburg-controlled parts of Alsace and the “Three Bishoprics” of Metz, Toul, and Verdun (much of which it had occupied for a long time already), as well as the fortresses of Breisach and Philippsburg on the far side of the Rhine.  Sweden gained West Pomerania with its port of Stettin, plus the bishoprics of Bremen and Verden.  It thereby controlled the mouths of Germany’s three great rivers:  the Elbe, the Weser, and the Oder.  Brandenburg, which fought bitterly to retain Pomerania (which had come to it by inheritance during the war), got to keep not only East Pomerania but also the territory of Magdeburg, Halberstadt, and Minden.

France deliberately pushed Spain to the side during these negotiations, trying to isolate it.  This worked, as Spain would eventually be left out of the Peace of Westphalia, but only at the expense of alienating the United Provinces, which negotiated their own settlement with Spain in January, 1648.  Spain gave in on all major points, but peace with the Dutch allowed it to carry on the war with France for another decade.

A parallel set of negotiations was carried on among Imperial estates over their own political issues, particularly those related to religion.  At the beginning, neither side was willing to compromise, but by 1648 the situation had changed.  Catholics were willing to give in to avoid further devastation in the war, and Protestants feared that, with France and Sweden’s demands settled, they would not continue the war for the sake of German Protestants.  The settlement reaffirmed the Peace of Augsburg to some extent, but granted limited toleration to religious minorities and included Calvinists among acceptable Protestant alternatives.  The Imperial Diet, representative instituion of the Empire, was prohibited from settling religious questions by majority vote; instead, it had to rely on the friendly agreement of all parties.  The Austrian Habsburgs lost power in the Empire, but their lands were excluded from the general toleration and they avoided various proposals to check their control of the elective position of Emperor (for example, a term limit proposal that would have prevented two members of the same family from serving consecutively).

Demobilization proved an enormous task, especially as it was coupled with a massive payment to Sweden’s army.  A special conference was called to Nuremberg to resolve it and settle those religious disputes that had been deferred until after the peace.  It wasn’t until 1650 that the majority of Swedish troops had been demobilized or returned to Sweden.  Many disputes over religious settlements, which had been under the jurisdiction of a special committee, remained unresolved at that time.

Results: Sweden was a major winner, and it nearly conquered Poland in the 1650’s.  However, it could not sustain its massive military involvements.  France finally defeated Spain with the Peace of the Pyrenees in 1659 and became the undisputed greatest power in Europe under Louis XIV.  The Dutch and English began adopting a conscious policy of collecting allies to balance French power.

Long-term significance: Protestants celebrated Westphalia as a victory for religious freedom.  Outside of the Empire, and especially in France, people saw the enforced weakness of Imperial government as a major feature, since it prevented Germany from becoming an aggressive power.  This was irritating to Germans in the 19th century when nationalism became important, and the German annexation of Alsace and Lorraine following the Franco-Prussian War was a direct response to France’s territorial acquisitions in the Peace of Westphalia.  Today, Westphalia is mainly a byword for sovereignty.  It is said to have begun an era when states were independent of religious motives and did not intervene in each others’ affairs, although this is disputed.