If I had my way, this book would have been heavily illustrated.  The printing business being what it is these days, it could not bear the extra cost.  However, the internet — which is largely responsible for the decline of printing — also provides a partial way out of the problem.  Here, you can see the images that I would have added had I been able to.

p.1: Portrait of Queen Christina, source of many of the quotations in this book and reigning Swedish monarch at the time of the Peace of Westphalia.

Fall of the Damned by Rubens

Fall of the Damned by Rubens

Van Dyck, Portrait of Charles I

Van Dyck’s portrait of Charles I

Velazquez, The Surrender of Breda

Velazquez, The Surrender of Breda

Lands of the elector of Brandenburg

12: Map showing the disparate realms of the elector of Brandenburg

Map showing the divided realms ruled by Philip IV — and this just includes the European lands, not those in the Americas, East Indies, or Philippines
Chapter 5

128: A photograph of St. Lambert’s church in Münster showing the cages used to kill the Anabaptist leaders

Painting of a Westphalian meal with ham and pumpernickel

Real pumpernickel, quite a bit denser and drier than what passes for pumpernickel in America

Connections between Münster and Osnabrück

133: Connections between Münster and Osnabrück

The Field of the Cloth of Gold

134: The Field of the Cloth of Gold:  how monarchs negotiated

136: An interactive map showing where the main representatives stayed in Münster

Postal connections to the Congress cities

156: Postal connections  to the congress cities

The “peace rider” spreading the news that the war is over

The “peace rider” announcing the Peace of Westphalia.  He blows the posthorn that was common to mail delivery in the Empire 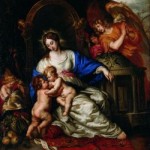 Allegory on the Peace of Westphalia, Joachim Sandrart, 1648

364:  An allegorical painting on the Peace of Westphalia by Joachim von Sandrart 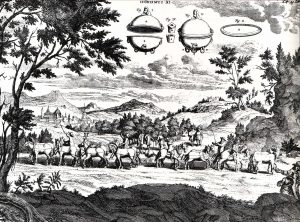 Guericke’s demonstration of the vacuum

366: An image of Otto von Guericke’s demonstration of the power of the vacuum