earned that there is a tradition of children riding stick horses in Osnabrück on October 25th, as though they were spreading news of the peace.  This has the wonderful German name of Steckenpferdreiten. The “Peace Rider” (Friedensreiter) is indeed a figure from the Peace of Westphalia, and the inspiration for the post horn that I use in this site’s logo.  The tradition of children’s re-enacting the peace riders dates from 1948, when they were celebrating the 300th anniversary of the Peace of Westphalia.  Although it is a modern festival, it does seem to owe something to history:  a similar event from 1650 at the Nuremberg Execution Diet is the inspiration. 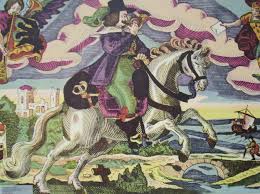 According to Wikipedia, “The children “ride” towards the town hall of Osnabrück – in whose historic Friedenssaal (Hall of Peace) the 1648 peace treaty was signed.”  Of course, both the treaty of Münster and the treaty of Osnabrück were actually signed in Münster, so that their signing could be co-ordinated to occur simultaneously.  I suppose it would be a bit much to expect the children to “ride” over 30 miles to Münster!

This entry was posted on Tuesday, November 5th, 2019 at 10:43 am and is filed under commemoration. You can follow any responses to this entry through the RSS 2.0 feed. You can leave a response, or trackback from your own site.