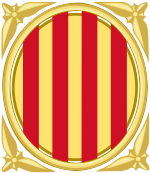 I recently learned that Catalonia is scheduled to vote on independence on October 1st, which is less than a week away.  How is this related to the Peace of Westphalia?  Very closely, as the fate of Catalonia was perhaps the touchiest part of the negotiations, and was certainly the main reason France and Spain could not reach an agreement.  When they finally made peace 11 years later, it was only after the Catalonian issue had been completely resolved by Spain’s reconquest of the province.

Catalonia has its origins as the Spanish March that Charlemagne had conquered from the Muslims — a very small and early beginning of the Reconquista.  It ended up a part of the Kingdom of Aragon, but France retained a claim to it until the 13th century.  In 1640, Catalonia rose up against Spain and declared its independence.  This marked the beginning of a drastic downturn in Spain’s military fortunes.  Shortly thereafter, Portugal also declared independence, meaning that, without Catalonia’s revolt, it is possible that Portugal might not have become independent.

France was quick to recognize Catalonia’s independence, but a determined Spanish counterattack convinced the Catalonians that they stood little chance as an independent state; consequently, they placed themselves under French protection.  Catalonia became a part of the French monarchy, under guarantees that France would respect its rights and privileges that Spain had violated leading up to the revolt.  Based on other cities and territories that accepted French protection (such as in Alsace), I feel confident that Catalonia would have ultimately been disappointed with their new arrangement.  In the short run, it created a nearly intractable legal problem in that Philip IV refused to accept the withdrawal of Catalan obedience, but Louis XIII (and soon thereafter his son, Louis XIV) could not consent to the return of Catalonia to Spain.  There were actually two things preventing France from returning Catalonia.  One, as it had now become part of the royal patrimony, it was considered inalienable, and going back on that principle would call into question a French legal doctrine dating back two centuries that had been used to justify the impossibility of ceding land to other states.  Two, as France had agreed to protect Catalonian rights against Spain, the mere suggestion that they might be willing to return the province to Philip IV would have seemed like betrayal and would have hurt France’s international reputation severely, not to mention the likelihood that Catalans might have tried to strike a deal with Philip IV at the first hint of French treachery, which could deprive France of all the advantages it had gained from the province’s rebellion.  The situation regarding Portugal was similar, but France did not have the liability of actually having agreed to make Portugal part of the French crown, so it had more flexibility.

The best either side could hope for was a truce in Catalonia.  For France, the longer the truce was for, the better, as it would enable them to incorporate the province into royal government and gain legitimacy by prescription.  It wanted a truce of at least 30 years.  Spain hoped for just the opposite:  as short a truce as possible, just enough for Spain to disentangle itself from its other conflicts (notably with the Dutch Republic) and focus its efforts on Catalonia.  The Dutch, who had no particular desire to continue the war either then or in the future for the sake of French conquests in Iberia, eventually made peace with Spain while the French-Spanish war continued.  Thanks in part to unrest in France, Spain was able to retake Catalonia in the years immediately following 1648.

In point of fact, the borders in Western Europe have changed remarkably little in the past 500 years or so. Looked at from one perspective, it seems almost inevitable that the modern states would take on the shapes that they have:  how would France not encompass all the French-speaking peoples, Italy the Italian, Spain the Spanish, and so forth.  But this only appears true until one looks at the cases more closely.  Alsace was a Germanophone territory until the 17th century and only gradually switched to French over the next two hundred years.  There are many French speakers in Belgium, mixed with Flemish speakers, whose language is very close to Dutch.  Switzerland includes German, French, and Italian speakers.  And Catalan is a distinct language from Castilian; very similar, it is true, but then Portuguese is also very similar, and Galician is closer to Portuguese than to Castilian.  In short, much of what we take for granted about Europe’s borders only appear so because territories have been stable and have homogenized over time, and because we tend to dismiss anomalies.

The borders in Eastern Europe have been more fluid, and I have witnessed in my lifetime quite a number of significant changes:  the creation of independent states in Estonia, Latvia, Lithuania, Moldova, and the Ukraine, the breakup of Yugoslavia into a number of smaller, more homogeneous countries, and the division of Czechoslovakia into two states.  Most of these changes have been welcomed in the West as a chance for people with a distinct language and culture to become independent and self-determining.  (The way that Yugoslavia broke up was a tragedy, of course, but now that it has happened, I haven’t heard anyone other than Serbs urging a reunion.)  Strangely, though, anything resembling an independence movement in Western Europe is usually treated as an impending disaster.  Even the British withdrawal from the European Union, which is quite a young organization and is not yet a proper government, brought about great howls of protest.  Similarly, the Catalonian referendum generally seems to be viewed unfavourably (if I may judge from a tiny bit of reading) outside of Catalonia itself.

As so often happens, I take the less popular side.  In general, I sympathize with independence movements wherever they occur.  I don’t always agree with them or think they would be for the best, but I understand why one group of people would feel like they don’t belong with another, and I am very conscious of how difficult it is to get any government to part voluntarily with any part of itself.  Spain tried to grant some concessions to Catalonia in 2006, but the nation’s courts ruled many of them illegal and unconstitutional.  I’m not surprised that Spain’s government would object to the independence of Catalonia.  It is almost a given that a government will cede power and land only to force.  Arguably a government’s main purpose is to keep people united, so I don’t expect it just to wave goodbye at any region that happens to vote itself independence.  What astonishes me is that people with no stake in the government in question, and who purport to believe that governments are founded on the will of the people, should be so hostile to independence movements.  How can a popular democracy insist that no region may legally secede and still be consistent with its principles?  How can it be right to force a people to remain in a voluntary union?

In some cases, the creation of a new, independent country out of an older, larger one presents difficulties in international relations.  The breakup of Austria-Hungary after WWI left a number of small, unstable, and relatively weak countries in Germany’s vicinity, and these countries were easy targets for German alliance offers — or, in case they refused, for German invasions.  Changing gears to the present, the union of Kurds in Turkey, Iraq, and Iran into an independent Kurdistan would introduce a major complication into an already messy international situation in the Near East.  Arguably, a landlocked country under Kurdish rule would be unstable and would have unresolved territorial claims against virtually all of its neighbours, which could mean even more warfare.  In my view, Kurds have suffered enough and deserve the opportunity to rule themselves; but it’s hard to disagree that the creation of Kurdistan would spawn all sorts of unknown issues that we can’t possibly expect to anticipate.

One hundred years ago, instability in the international system would have been a major concern regarding independence movements.  But I can’t believe that anyone seriously expects an independent Catalonia would make war more likely on the Iberian penninsula, any more than one would expect Britain’s exit from the EU to increase the likelihood of war.  The same goes for independence movements in the Basque territories, Scotland, Flanders, Northern Italy, and Quebec.  So, while most of the West laments every independence movement as a social breakdown, I support them as a chance for people to determine their fate as part of a smaller, more homogeneous group; ironically, as a chance for them to unite more closely to people whose principles they share, rather than to participate anonymously in the ever-widening circle of global culture.  Although my optimism is rather limited on this score, count me in Junts pel Sí.

This entry was posted on Monday, September 25th, 2017 at 10:10 pm and is filed under current events. You can follow any responses to this entry through the RSS 2.0 feed. You can leave a response, or trackback from your own site.