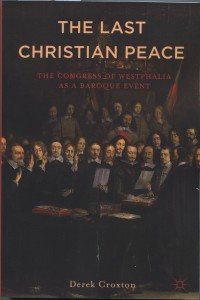 I was happy finally to receive my copies of the paperback edition of “Last Christian Peace” last week.  Even though I had to settle for the same cover art (for lack of money to pay royalties on the painting I wanted), I am much happier with this version than the last one.  The title on the hardcover (besides being different) was far too vertical and difficult to read.  I thought the same thing of the text.  The paperback is much easier to read and creates a pleasing effect.

I am also excited that the local Barnes and Noble agreed to carry a few copies of my book.  (I intend to ask New Dominion Books as well, but haven’t made it there.)  Even if no one buys it, it has long been a fantasy of mine to see my own book in a bookstore.  The store’s general manager was so nice and kept asking, “I wonder what will happen?” as though it might become a big seller.  It almost certainly won’t, but it makes me happy to have the opportunity.

Posted in Uncategorized | No Comments »